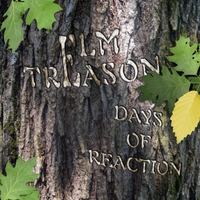 BIO
ELM TREASON is the musical union of Andrew Roman and Robert Steel.
Some say that ELM TREASON's brand ought to be "new music with a vintage vibe." People like labels, but Elm Treason doesn't. Really, Elm Treason’s music is just .... well, theirs.

Okay, they're rock and roll .... but even that is far too simple to adequately sum them up.  They're acoustic. They're soulful. They're heavy. They’re smooth.
Complex, manic, foreboding and smooth are just a small sample of the adjectives that one could muster to describe the sound resonating from this Staten Island, New York duo. They’ve been together since the Fall of 2010, originally intending to be an acoustic rock duo. However, in a relatively short period of time, they evolved from a team of mad musical basement noisemakers into a full-grown “lets-do-it-all-ourselves” musical dynamo.
They have gutted the new classic rock archetype with a collection of songs that blend together influences stretching the collective soundscape past the horizon and around the moon (or the closest mountain range). Their sound is kind of alternative, sort of. Some songs are a bit progressive. Some are funky are fluffy. Some are based in roots music, some are garnished in paisley. Some rock, some glide. Some float, others roll. It's maybe a little indie-ish and overall strangely familiar.
Truly, their vibe is quite eclectic – from bluesy rock to trippy grooves, from acoustic pop to pseudo-Brit rock; from 6/8 to 4/4; from neo-progressive to pentatonic scale heaven. It really is quite difficult to classify their music as sounding like “this group” or having the same feel as “that group.” Indeed, they have a lot of different “feels.”
This dynamic duo write, record and produce it all themselves. They are all about hooks, melody, harmonies and musicianship.
“Who we sound like really depends on the song,” Andy explains.
“Eclectic, overall…but each song is very distinct and definite,” says Bob.
A long road of music, in various forms of incarnation, led them to the end game of ELM TREASON.
Bob's previous bands included "Ambience" (playing underage in Staten Island clubs with bands almost twice their age). His second and Third bands were "Steel" and "Black Teacup Yorkie". One was a heavy metal band, the other was an acoustic based East Village coffee house group (with the same members). Steel's self-titled EP received a four star review in The Aquarian. His Fourth Band was called "Isko Suno" (a multicultural blend of rock, hip hop and trip hop). A review in the Village Voice called their music "Ethnic Groove".

As a pianist for the Brooklyn College Jazz Big Band and Small Ensemble, Bob performed at Amherst Unitarian Church in Amherst MA; at the Abrons Arts Center in Manhattan; and at the University of Connecticut in Storrs CT, for which he received a write up in a Hartford Newspaper.

Andy has played music over the years in a few groups/projects that never amounted to much, save for some critical experience and a bucket full of memories. His partnership with his buddy, Gil, in Washington was short-lived, albeit a load of fun. His collaboration with keyboardist Matt Werning was equally short, but inspirational. Perhaps the best collaboration was with his long-time friend, Rich, in a little project called Red Ant Picnic featuring such tracks as "Sister Alice," "End Game #3" and "Innocence Then."

Mostly, however, over the course of his musical life, he had been an open-mic night, open guitar-case in the park, subway platform kind of guy.

He has made his living in audio and video production. He was a minor TV celebrity for a time in Fort Wayne, Indiana  as part of the "Shane and Andy On The Road" series on Fox. He also created and hosted the wildly popular Major League Baseball radio program "Diamond Stuff" in Northwest Ohio. He is also a professional voice over actor and has won five Addy Awards for radio commercial writing/production.

Elm Treason's debut album, "Days of Reaction" is what Elm Bob calls the "culmination of our influences, learning experiences, rites of passage and stylistic mannerisms in one big amazing collaboration. All of our past efforts led up to this moment."
Posted by FAB4RADIO.COM Knottypine Studios at 2:30 PM