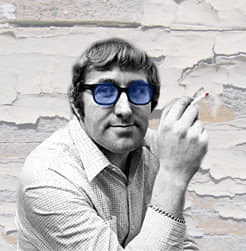 Going back, I will start on January 2, start of Twickenham fortnight.

Kevin Harrington and I set up all the equipment in the huge bare Stage One at the film studios.  And they started filming us right there from the beginning.   There was no scenery or anything, just the standard white background with lots of different colour lights playing on it as the setting.  So that apart from capturing good sound there would b good things for the camera to see.

At half eight that morning, between bites of breakfast, I telephoned round all four fellows to remind them it was getting up time and they were due at Twickenham by eleven.  On that first day, Paul was last to arrive – half an hour after noon!  Having come by underground, then local train, then taxi from Hampton Court Station.  He’d meant to do the entire journey by public transport but, knowing he was late, he chickened out and caught a cab rather than wait at the bus stop.

During the weeks which followed he often used trains and buses to and from what amounted to routine hours five-day working week!

Toast, cornflakes and tea were ready for each arrival on the open space of Stage One every morning.  Beatles prefer to get where ever they’re going for the day and THEN start the day’s eating!

Kevin and I brought over all the food from the Studios canteen.  For lunch they started off by using some new flats which have been built for film actors and actresses so that they can make themselves at home between takes without leaving the studio area.  That didn’t work because the food was cold by the time we served it so we block-booked a couple of big tables in the canteen and added a bottle or two of good wine to whatever was on the day’s menu!  Of course, we all know that canteen well.  We’d worked there on “A Hard Day’s Night,” “Help!” and more recently on the “Hey Jude” TV film clips which were done on the same stage. So all the crews are old mates too.

During the first week at Twickenham it was Elvis’ birthday.  The following day at lunch I reminded everyone that Elvis had just turned 34.  Where upon John stood up and toasted Elvis and the rest of us joined in.

One of the first new numbers the fellows got together was an up-tempo item of Paul’s called “Maxwell’s Silver Hammer.  If that title sounds familiar it’s because I mentioned it here in November as one of several numbers which were almost but not quite recorded before we finished “The Beatles” album sessions.  By the way, I play anvil on the finished version!

On Thursday, January 16, we finished at Twickenham and moved all our gear back into town.  On Monday January 20, we used the new Apple Studios in the West End for the first time.  Actually, Alex Mardas hadn’t put in our own studio equipment so EMI brought in an eight track tape machine and console as a temporary measure.  Alex started putting all the new equipment into the studio in the first week of February so that our most recent batch of sessions have made use of all his amazing gadgets!

The engineer for all these sessions at Apple has been Glyn Johns, a name you may well know for he’d got a great reputation and we were pleased we could get him.  He’s done a lot of stuff with The Stones at the Olympic Studios, produced the Steve Miller Band and so forth.  In fact, he’s more of a producer than an engineer although, of course, we had our own producer, recording manager George Martin on hand for that side of things.

First new number to be completed at Apple was something called “All I Want is You.”  Another was “Teddy Boy” and, as I mentioned earlier, there was “Maxwell’s Silver Hammer” from the end of last year.

Although they’d had all the rehearsal time they needed at Twickenham and all their material was written and ready to be recorded, the fellows spent hours each day “limbering up.”  Now that there aren’t regular concerts to keep them in musical and vocal trims, so to speak, they have fantastic jam sessions to get the singing and playing flowing free before they start putting things on tape.  They just go wild and roar into “Lawdy Miss Clawdy” or any of the 10 year old skiffle hits.  Some day we really must release a record of just such a jam session and let you hear what goes on before The Beatles tape their hits!  You should have heard the treatment they gave to “Maggie May!”

George had a pair of interesting presents to bring into the studio for the first sessions.  One was a splendid rosewood Telecaster guitar from Fender of America.   The other was a Leslie Speaker from Eric Clapton.  It’s a speaker with two revolving horns and a revolving drum.  You can put a guitar or organ through it and with an organ it gives a terrific swirling sound.

The same Thursday morning George decided to buy himself a third present and asked me to round up a complete collection of LP records by The Miracles for him.

Unlike previous times, The Beatles haven’t been using session musicians during the new series.  The new idea is to bring in regulars instead, regulars from Apple-signed groups or particular individual musicians who will work with them frequently whenever they want an extra guitarist or an extra organist.

One very important guy in this line is Billy Preston, formerly organist with Little Richard and a mate of the fellows since Hamburg days.  Billy was signed up as an Apple artist on January 31.  Although he’s an American he’s worked quite a bit in Britain, was here with the Ray Charles Orchestra not too long ago and had his own colour telly show on BBC-2 a few Fridays back.  So Billy has been a Fifth Beatle at most of the recent sessions.  Watch out for his solo debut on Apple in March or April.  Billy writes most of his own stuff, sings, dances and plays both organ and electric piano.  George will be producing Billy’s first Apple single.

Billy’s first session with The Beatles was on Wednesday, January 22 when he played electric pian.

During the first half of February Billy went back home to America for a brief tour of Texas but there weren’t many sessions while he was away and Billy was back in time for the latest recording over the past ten days.

Meanwhile the cameras have kept on rolling at every single recording session so that there is colour film, candid sounds and shots of every stage of the album’s production.

One particular day’s work at the end of January caused quite a stir.  To get something a bit different, an open-air sound, we shifted the session from the basement studio to the roof of 3 Savile Row!  With a scaffolding platform for all the gear.  You could hear the singing and playing right out across Regent Street and according to one unofficial spokesman for Savile Row police station, the local constabulary’s switchboard was jammed with dozens of calls from puzzled and/or cross neighbours of Apple’s within minutes!

We’d have loved to get a helicopter shot to show both the fellows on the roof and the crowd in the street but the law won’t let you fly one over London and it was too late to borrow a balloon!

The roof idea came after we’d taken a breath of fresh air on the roof after lunch the previous Sunday.  Anyway it’s certainly the first time The Beatles have recorded an album track on the roof in the middle of London!

While that was going on – at lunchtime on a Wednesday – we had film interviewers chatting to passers-by down below in the street.  Some of these comments just HAVE to fit into the film when it’s all put together!

Around here I have to finish for this month because space has run out on me.